Exmoor Caviar, delicious British sturgeon roe (Acipenser Baerii) produced in the clear waters of Devon and salted with Cornish Salt – a real West Country treat. I can’t recommend it enough, the Caviar has an excellent creamy flavour with just the right amount of saltiness. The best way to eat it – on its own, by the spoon! But if you want to spread it on something, put it on blini, the small yeasty pancakes from Russia, traditionally served with sour cream and caviar – recipe below. 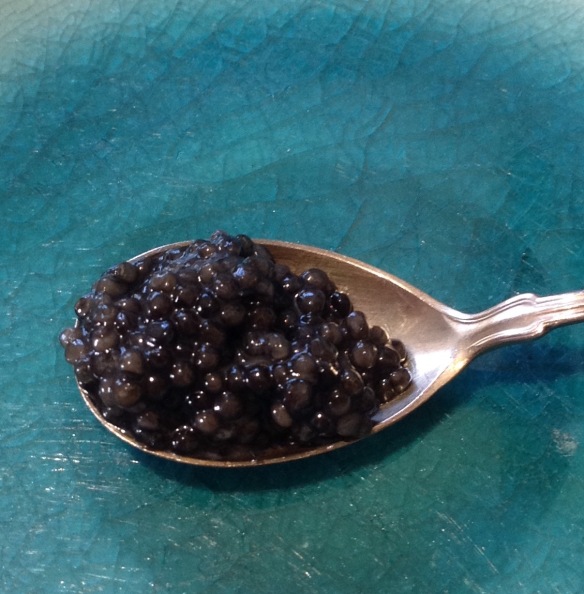 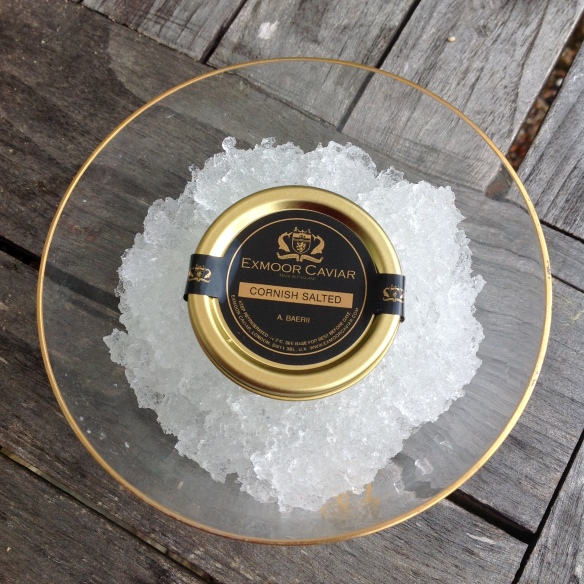 Classic Russian blini are made with wheat or buckwheat flour. I thought I’d try gluten-free flour blini for a change. I added a bit of bran to the recipe as the flour is white and it really worked. They had a satisfying texture and the same slight yeasty, sour tone as the classic recipe. 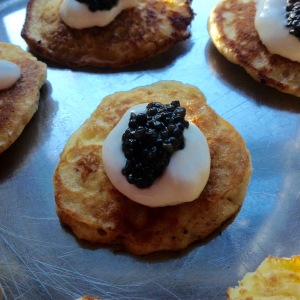 Place the Greek yoghurt and milk in a small saucepan and warm it gently – it must only be slightly warm, as too much heat will kill the yeast.

Now add the egg yolks to the milk, mix them in with a whisk and then pour the whole lot into the flour mixture. Whisk everything until you have a thick batter, then cover the bowl with a clean tea cloth and leave it in a warm place for about 1 hour.

It will now be bubbly and spongy.

Whisk the egg whites to stiff peaks and fold them in. Cover with the cloth again and leave for another hour or so.

When you are ready heat a little of the butter in a heavy bottomed or iron frying pan. Let the butter sizzle and drop 1 teaspoon for small blini of about 3-4cm across (or 1 tablespoon for larger blini) into the pan.

Fry for about 40 seconds then flip and repeat on the other side. The pancake should look thick and fluffy with a few air bubbles and golden in colour.

Timings depend on your hob. Transfer it to a wire rack and repeat, brushing the pan with butter each time. This mixture should give you about 24 small blini or 16 bigger ones. Serve with sour cream and caviar. 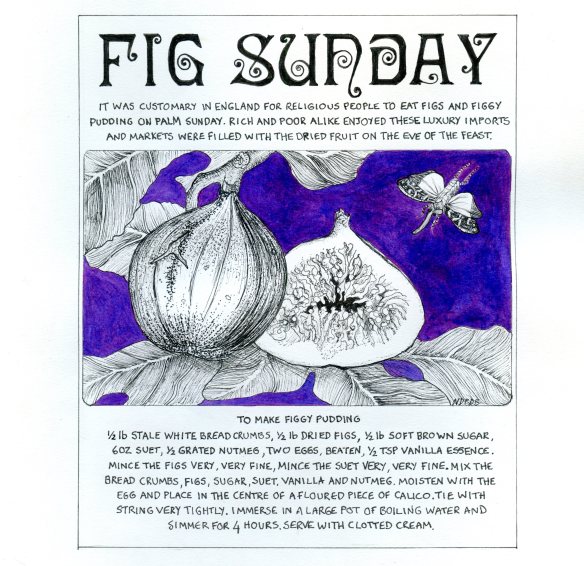 This is hearty fare, be warned! You might need to go on a long country walk after eating this figgy delight.

5. When well mixed place in a clean, floured muslin cloth and tie tightly.

6. Drop into a pan of boiling water and leave at a low simmer for 4 hours.

7. Remove from the pan and hang to drain and cool for 5 minute, unwrap the figgy cannon ball from the cloth and place on a plate.

Serve with cream, and a cold glass of white wine. 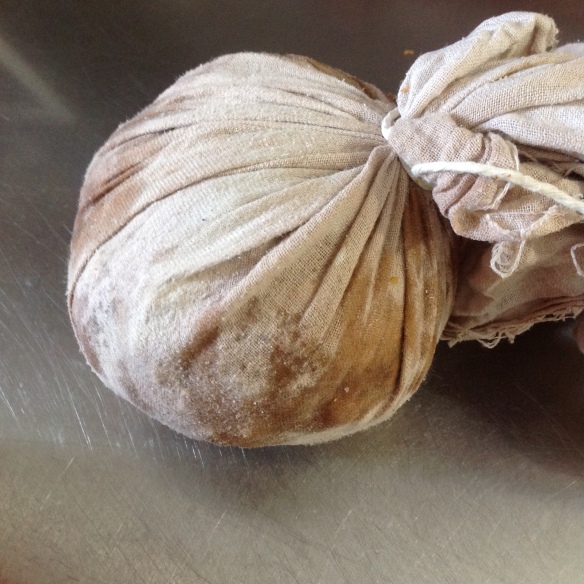 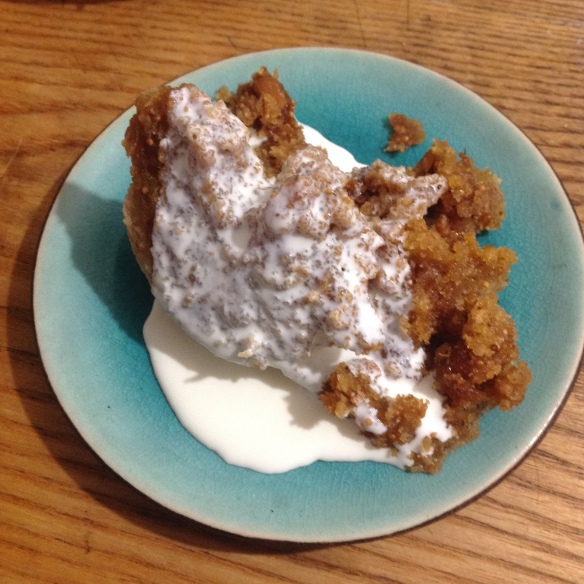 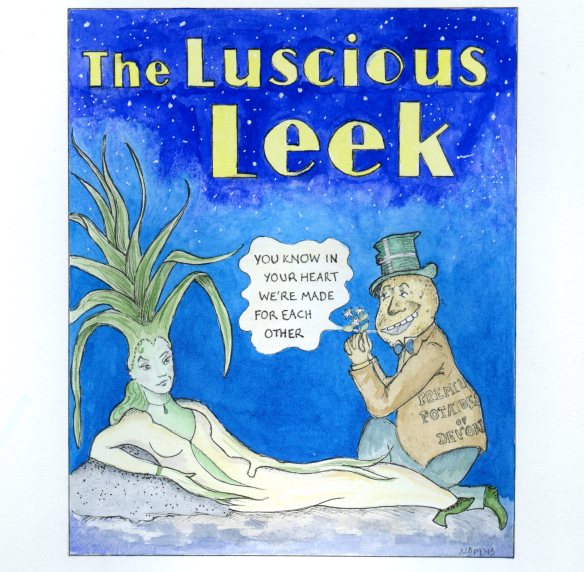 Peel and roughly slice the carrot

Peel and roughly chop the onions

Cut the ends off the leeks, quarter them lengthways, wash them under running water and cut them into 1cm slices

Peel and slice the garlic

Add all your chopped and sliced ingredients and mix together

Cook for around 10 minutes with the lid partially on with room to steam, until the carrots have softened, and the onion and leeks are lightly golden

Peel the potatoes and cut them into 1cm dice

Pour the stock onto the vegetables

Give the soup a good stir and bring to the boil

Remove from the heat. Blend the soup in a food processor or use a stick blender, until smooth. Season with salt and lots of ground black pepper.

Serve with a sprinkle of parsley. Also good eaten cold with a dollop of yoghurt. 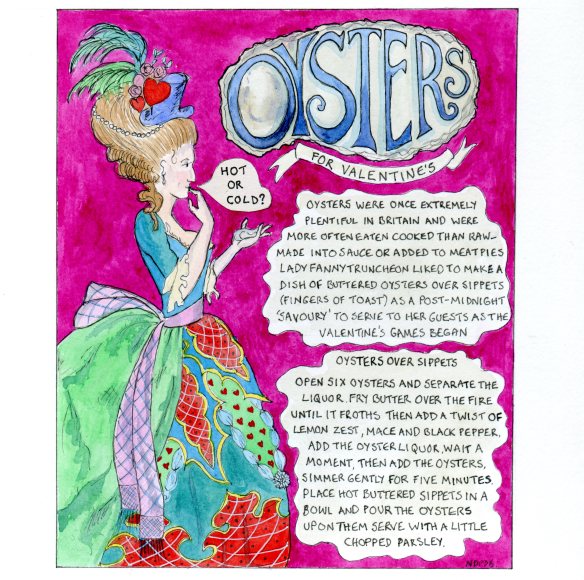 Oysters Hot, Oysters Cold? I like ’em hot. A modern day version of this is to fy them and stuff them into a slim baguette, warmed and spread with garlic butter. Mmmm.

The Christmas plum pudding we know today evolved from that old British food staple, ‘pottage’ – a soupy stew made from grain, vegetables and meat, thickened with breadcrumbs and flavoured with spices, and sometimes, fruit and wine. Plum pottage was a medieval Christmas dish and it was served as a first course, which would have been a hearty start to the meal, one wonders if you would have room for anything else.

Oddly, as with so many little kitchen utensils, the re-useable pudding cloth only became common at the beginning of the 17th century, before that few thought to use fabric to cook a pud. The fashion of encasing the popular baked puddings and pottages in a cloth then took off (particularly as most poor households did not have an oven) and some, like plum pudding were also left to hang after boiling or steaming, to improve the flavour.

As the centuries wore on the meat in plum pottage was replaced by suet, the plums (dried prunes) replaced by a wider variety of dried fruits and nuts, and the alcohol content raised considerably. By the 1830’s the ‘cannonball’ crowned with holly we associate with Christmas had firmly taken hold in our culinary calendar

I include below a recipe for Christmas Pudding in Modern Cookery for Private Families by Eliza Acton (1868 ed) below, but it’s rather late in the day to make this for Christmas so if you wish to buy one, I recommend the superb puddings of Georgie Porgies Puddings https://www.georgieporgiespuddings.co.uk/ which can be bought online.

To steam a pudding, you place it in a cloth in a bowl submerged in simmering water-https://www.bbcgoodfood.com/videos/…/how-steam-pudding

To boil a ball pudding – the pud must be wrapped in calico or very thick muslin (scalded with hot kettle water to remove any chemicals) and submerged in simmering water. The scalded cloth should be floured, then the mixture placed in the middle and the corners of the cloth brought together above it, form the ball and tie it. Boil the pudding according to weight usually about 4 -5 hours but 3 1/2 in the recipe below.  Remove it with tongs and allow to hang in a cool place, over a bowl for two days or until the cloth is dry. I like to re-tie it new dry calico to avoid risk of mould and then hang for a month. Re-boil on Christmas day for 1-2 hours.

zest of one lemon

juice of half lemon

Mix everything (except the brandy) together with your hands in a big bowl. Add the liquor and mix again.

Pack the mincemeat into sterilised jars, seal with greaseproof paper and tight-fitting lids. I made 10 jam jars full. Store in a cool place – if you have the time, let the mincemeat mature for 2-3 weeks before using it for mince pies. The meat is preserved by the sugar and brandy and I’ve kept jars for a year to no ill effect, then it is ‘cooked’ in the mince pies but I have to add a health warning – this recipe is to be made at your own risk. Many of the products described on this website involve significant risks, and you should not enter into any recipe or cooking action unless you have fully understood all such risks and have independently determined that they are appropriate for you. Well, that’s been said so….

Make up the pastry by sifting the flour and salt into a mixing bowl and rubbing the fats into it until the mixture resembles fine crumbs. Then add just enough cold water to mix to a dough that leaves the bowl clean. I needed 140ml of water but each dough may differ, just don’t add it all at once but be cautious and add little at a time until it comes together.

Leave the pastry to rest in a polythene bag in the refrigerator for 20-30 minutes, then roll half of it out as thinly as possible and cut it into two dozen 3 inch (7.5 cm) rounds (I use a cup), gathering up the scraps and re-rolling. Then do the same with the other half of the pastry, this time using the 2 1⁄2 inch (6 cm) cutter (and a smaller drinking glass).

Now grease the patty tins lightly and line them with the larger rounds. Fill these with mincemeat to the level of the edges of the pastry. Dampen the edges of the smaller rounds of pastry with water and press them lightly into position to form lids, sealing the edges. Brush each one with milk or beaten egg and make three snips in the tops with a pair of scissors. (you will have enough pastry left over to make twelve more on another day). Bake near the top of the oven for 25-30 minutes until light golden brown. Cool on a wire tray and sprinkle with icing sugar. EAT THEM WHILE WARM!

If you manage not to eat them all, and we never do, store the pies in an airtight container in the fridge.

Mrs Beeton’s extremely boozy beef tongue mincemeat recipe below, if you fancy trying it, tell me how you got on?

We have five cider apple trees and have just planted the same again. Fun 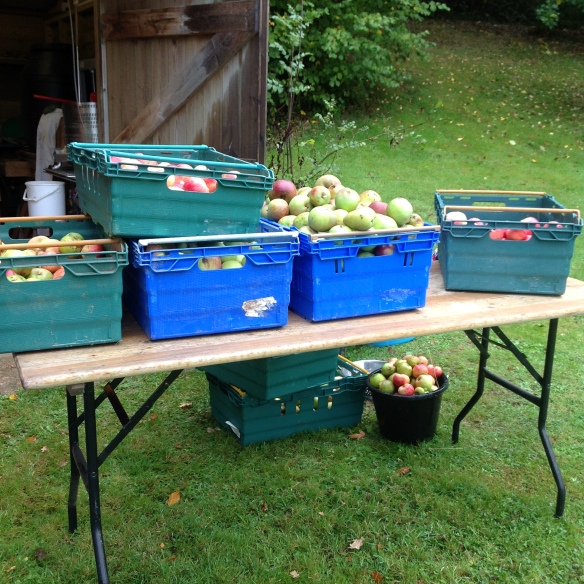 Break them up in the ‘scratter’.

Squash’em. Put the juice in a tub and let it do it’s work.

All you need is apples to make cider.

Flour the meat. Heat oil fry onions until transparent then add meat and fry until brown.

Mix stock and cider and deglaze pan. Bring to boil.